A Kiap was often lonely and alone. 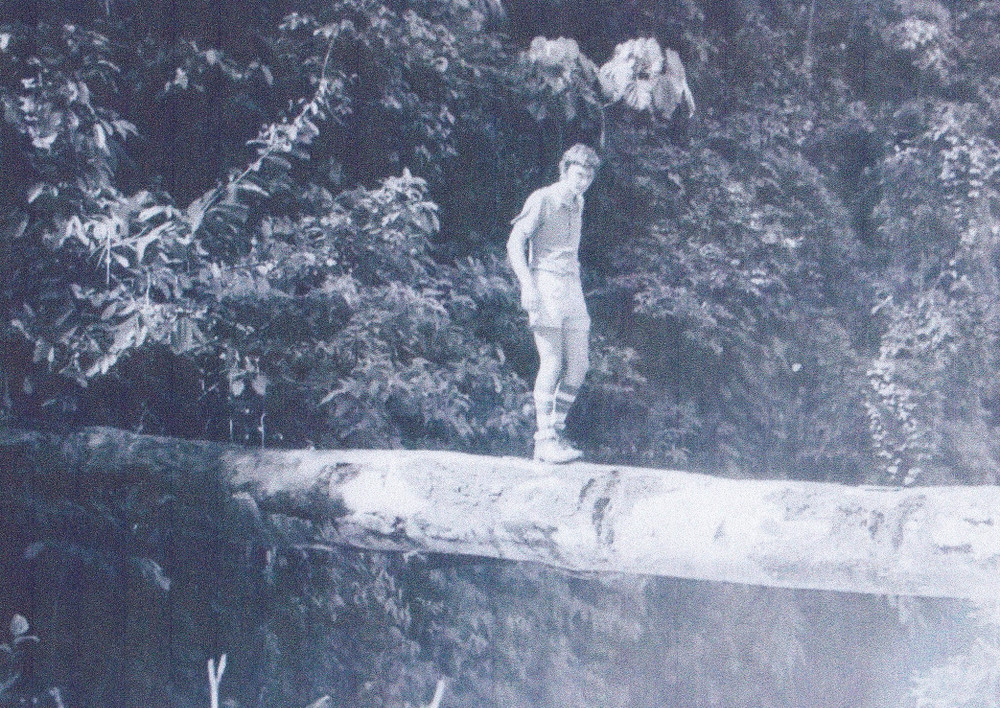 I have always liked this picture, which was taken deep in Papua New Guinea’s formidable interior, because it is a metaphor.

It might underline how young I was, or convey some of my apprehension about the drop below, but its real message is that I am alone, caught between two fixed points, in a no-man’s land.

It was taken while I was working for PNG’s government and those fixed points were the culture chasm between the global economic and administrative ideas isolated village people were being encouraged to adopt and the difficulty I had in helping them to understand, and accept, the often radical changes their government wanted them to make to the way they organised their village life.

Like all Kiaps I tried hard to be successful but nothing could disguise the yawning gap between the modern culture I represented and the many, quite different, long established cultures that faced me in the villages I visited.

As I make this this log bridge crossing on my way to one of them I appear to be absolutely stranded as well as being completely alone.

Abel Michenaud – a Roman Catholic priest who blasted out roads with gelignite. 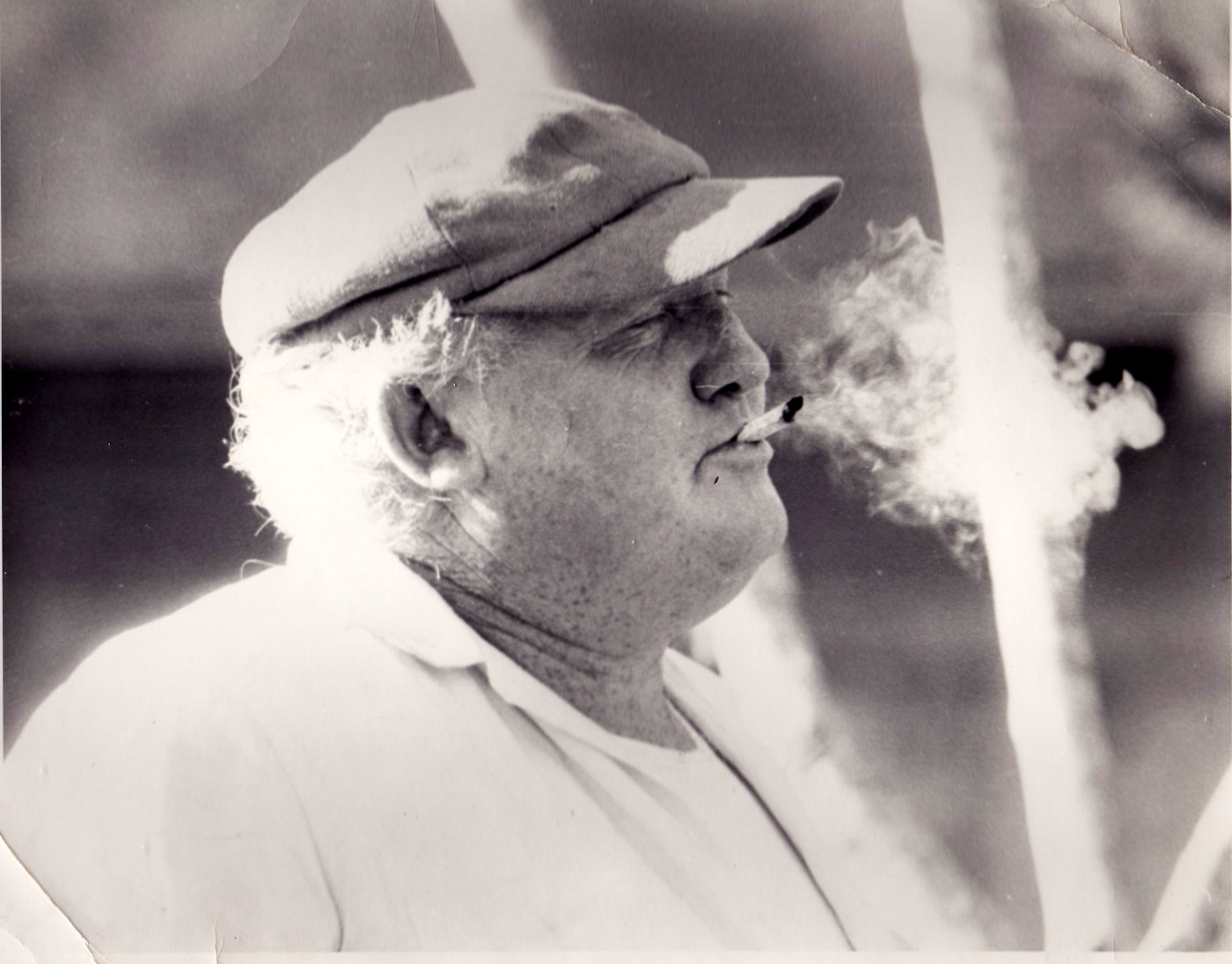 This is Abel Michenaud. It must be obvious he was a Frenchman. He was just as enthusiastic about his huge evening glass of rough vin rouge as he was about his ubiquitous cigarette.

He was born in time to be inducted by Nazi invaders as a forced labourer in a so-called “slave camp” near Nantes in 1943, later became a Roman Catholic priest and when I met him in 1973 was in charge of a remote mission station at Kamulai in the Guari section of the Goilala sub-district in Papua New Guinea (PNG).

Father Abel worked with his hands. He cut timber to build school classrooms, held a gelignite blasting permit which made him indispensable to local road construction, and oversaw a cattle breeding project which he hoped would eventually become the mainstay of the Kunimeipa economy.

I came across his portrait while sorting through pictures accumulated in PNG and it reminded me that many individuals, from a range of nations, and covering a range of occupations, were prominent within the country at the time.

Abel was no stranger to sudden death. The daily trek to slave work, flanked by Nazi guards, regularly involved negotiation of fresh French corpses that had been shot overnight.

And when he arrived at Kamulai in 1950 he was immediately greeted by an axe murder almost outside his back door.

When I last saw him in July 1975 the mission station at Kamulai, which boasted a school, a trade store selling essentials at little more than cost price, and a cluster of medical aid posts was the thriving epicentre of the Kunimeipa’s developing economy.

If you would like to know more about him, and the ultimate fate of Kamulai Mission, you will find it in the Goilala section of “The Northumbrian Kiap”, which can be purchased remotely using the sequence presented on this website’s Product Page.

There is no substitute for direct, person to person, communication 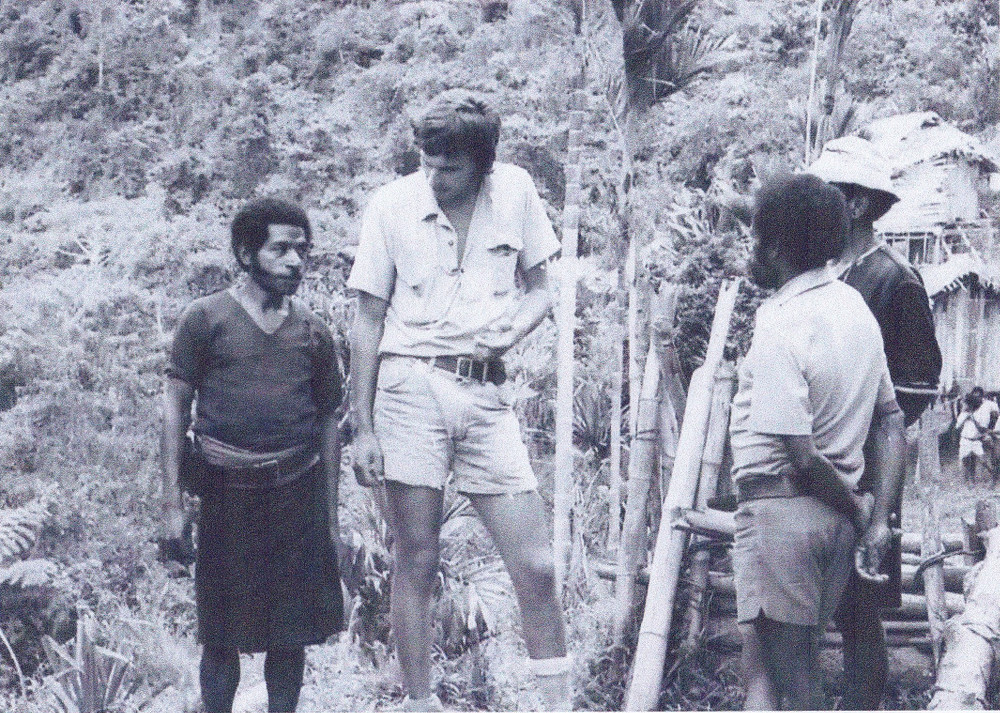 My working experience in Papua New Guinea (PNG) either side of 1970 drummed in one of life’s fundamentals – it is impossible to satisfactorily conduct any type of work, or operation, without being able to communicate directly, and well, with everyone involved.

This was not easy for a Briton dropped in, almost overnight, on a country with 800, yes eight hundred, mutually exclusive languages and which at the time contained very few people who could speak English.

I was saved by an ever-evolving lingua-franca which the people of the country had themselves adopted, and nurtured, so they could overcome an obstacle course of internal language barriers and be able to speak freely amongst themselves.

They called it Tok-Pisin, Europeans called it Pidgin English, and my ability after only nine months to speak it without hesitation, unnecessary flourish, and with village inflexion, opened up a succession of advanced work avenues because I was better qualified for the task than many other Europeans who had worked in the country a great deal longer than myself.

My advantage was that I was taught by village people, not other Europeans – many of whom tended to see Tok-Pisin as a novelty instead of an essential, and were in fact poor performers.

The reward for this effort came almost as soon as I was employed by the Australian government as a junior staff member in its village administration department.

The principal requirement of recruits to this position who had arrived directly from Australia was to acquire adequate ability in Tok-Pisin because without it their work programme was extremely limited. This process was expected to take the best part of two years.

However as soon as the Assistant District Commissioner discovered I could communicate easily with village people I was immediately allocated tasks which required face to face conversations with community leaders.

So sitting with them in their huts during the evening, legs crossed and fire burning, I was able, as you can read in “The Northumbrian Kiap” and despite being in government service less than six months, to discuss plans to secure a successful truce in a difficult intra-clan conflict and on another occasion confirm a community’s intention to murder a European planter.

My reward was to be installed as OIC of a four month patrol during which PNG’s new, post-colonial, flag was presented to the people, whose villages I was passing through, for the first time – a potentially difficult task which was not always guaranteed a friendly reception.

How attractive would these “Misfits who built a Nation” be to prospective employers today? 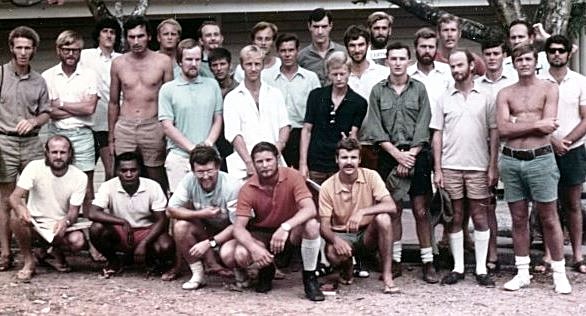 What would a modern, company, recruiter have made of the scruffy bunch of young men in the photo above?

It was taken between classes in Port Moresby, capital of Papua New Guinea, in 1971 after they had been engaged in Australia to train as Kiaps.

There would not have been a straightforward CV among them. The age range was 19 to 41, eleven out of the intake of 39 were married, seven were born in the UK, one in Canada and two were Vietnam veterans. Perhaps half had secured a tertiary qualification

Intakes took place at regular six month intervals and recruits had to be male because their work was often remote and could be dangerous,

The picture surfaced in January 2018 under the headline “Misfits who built a Nation” in an article written for PNG Attitude – a website dedicated to discussion of Papua New Guinea’s progress since it became independent in 1975.

Its describes them as “an odd mixture” whose primary capacity was expected to be an ability to “experiment, improvise and innovate” within a testing working environment in which 250 similarly trained staffers, often working alone, oversaw all theatres of rural administration and welfare covering three million, often isolated, village people.

They were also tagged “strange, effective and rare”. Readers of “The Northumbrian Kiap” will be able to judge for themselves whether that was, or was not, a correct description.